The transfer of a district police officer (DPO) posted in Pakpattan stirred up a controversy as media reports suggested that the transfer was linked to an alleged altercation between the police official and First Lady Bushra Imran’s former husband Khawar Fareed Maneka.
According to Pakpattan police spokesperson Sajid Ali Anwar, Pakpattan DPO Rizwan Gondal’s men stopped Maneka’s car as he was travelling towards Pir Ghani on the night of August 23.

Anwar claimed that Maneka refused to stop on the policemen’s request and misbehaved with them. Subsequently, Maneka demanded that the DPO of the area should visit his dera to personally apologise to him, he added.
When Gondal’s transfer orders started making rounds, it was widely speculated in news and social media that that the police officer was transferred because of the August 23 episode.
However, the Punjab Police sent out a clarification in a tweet, saying: “DPO Gondal was transferred for displaying conduct unbecoming of a police officer and misreporting facts.”
The statement added that Punjab Inspector General Dr Syed Kaleem Imam had not transferred Gondal under any “pressure”; rather, the police officer had been transferred because of repeatedly lying about an altercation with a citizen. The statement did not identify the citizen or elaborate on the incident.
The IG Punjab has also ordered an inquiry against the DPO for misreporting facts, misinterpreting the transfer orders and releasing it on social media. 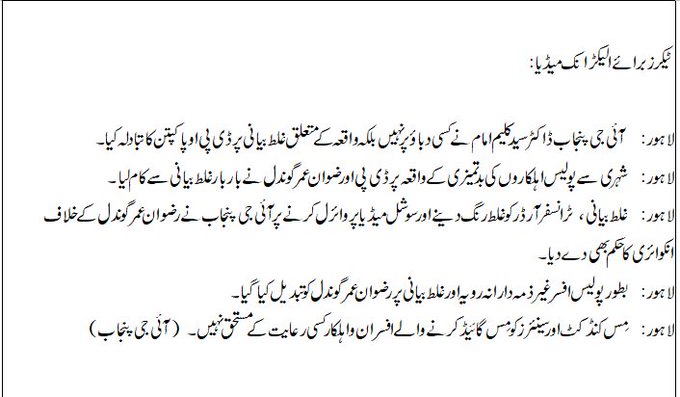