ISLAMABAD: All Pakistan Muslim League-Nawaz (PML-N) candidates, who had filed nomination papers for March 3 Senate polls singed by former prime minister Nawaz Sharif, would be considered as independents, the Election Commission of Pakistan (ECP) decided.
The decision came a day after the Supreme Court declared Nawaz Sharif ineligible to head the ruling party. In its short verdict on Election Act 2017 case, the apex court further said that all steps taken by him as a party president after his disqualification as member of parliament on July 28, would be treated as to have never been taken place in the eyes of the law.
The top court directed the ECP to remove name of Nawaz as head of PML-N. Within hours ECP complied with the apex court verdict and sent a letter addressed to the Acting Secretary General of PML-N, asking him to fill the office of president of his party as per Article 15 of the PML-N constitution.

The Supreme Court verdict has an immediate and direct bearing on Senate elections scheduled for March 3, Senate by-election on March 1, and by-elections for PP-30 Sargodha-III on March 4 and PS-7 Ghotki-III on March 5.
The commission rejected an application filed by PML-N chairman Raja Zafarul Haq, requesting the ECP to allow his party’s candidates submit fresh tickets singed by him.

The ECP had issued the schedule for Senate election to fill the vacant seats on account of expiry of term of 52 Senators on February 2. There are different steps involved in the conduct of election to Senate, starting from the filing of nomination forms to last date for the withdrawal of candidature.
The polling date was fixed for March 3. The candidates, during filing of nomination papers, provided to Returning Officers party tickets duly signed by the respective party heads of the political parties or the persons authorised to do that.
The lists of contesting candidates as required under Rule 102 of the Election Rules 2017 were finalised by the Returning Officers and duly published on February 22 a day after the apex court issued the directives.
The ECP, in its decision said that in order to ensure the rights of candidates are not affected by the SC order, the commission deliberated upon following options for a smooth and timely election of Senate and by-elections: (a) to postpone the forthcoming election of the Senate and by-elections for PP-30 Sargodha-III and PS-7 Ghotki-III; (b) election be held on time to the exclusion of candidates nominated by Pakistan Muslim League-Nawaz; (c) extension of time to the candidates affected as a result of order of august court to produce fresh party affiliation certificates; (d) to treat the candidates affected as a result of this order as independent candidates, as to hold election on time.
While dilating upon option one, the ECP said it is of the opinion that for the smooth running of democracy in the country and to protect the rights of candidates and political parties who have not been affected as a result of order of august Court, it would be fair to continue with the election schedule of Senate and by-elections. The option of postponement was not considered viable for the democratic process in country.
Regarding option (b), the commission was of the opinion that exclusion of candidates from the lists of contesting candidates for Senate and by-elections, who are otherwise eligible to contest the respective elections, would not be fair for them to disqualify them on the ground that the person who nominated them is himself disqualified.
Had these candidates not obtained the party tickets from Nawaz Sharif, they would have stood eligible as independent or from the platform of other political parties to contest the election. These candidates became ineligible on account of operation of law. In order to provide level playing field, the commission considers that exclusion of these candidates from the election process would amount to injustice and deprivation to these candidates.
In regard to option (c), the commission said it considers that all the steps involved in the election process as per schedule are regulated in terms of provisions provided in Election Act, 2017 and the rules framed there under. Except the polling, the entire process has been completed, so any extension in the time of schedule would amount to deviation from the prescribed procedure as is provided under the law.
“After having gone through the preceding options and not finding them feasible, the fourth option i.e.  treating the affected candidates be considered as independent candidates in order to conduct election on time…” ECP order read.
“The affected candidates are, therefore, treated as independent candidates and the respective Returning Officers are directed to revise Form-33 and Form-54 of the fist of contesting candidates accordingly,” it added. 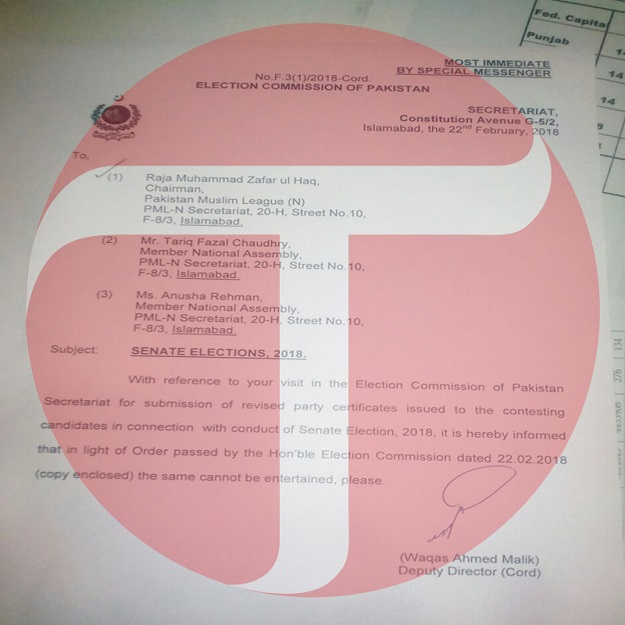