PESHAWAR: “Pakistan shall not fight any imposed war inside its territory again,” Prime Minister Imran Khan said in an oblique reference to the war on terrorism which he has repeatedly said in the past, is not our war.
Pakistan joined the US-led war on terrorism after the 9/11 terrorist attacks and has suffered colossally since then, but Washington doesn’t acknowledge the match-less sacrifices of its on-off ally and instead keep pushing Islamabad to do more.
The recent outburst of allegations by US President Donald Trump in an interview with Fox News further disillusioned Pakistan with Premier Imran saying that “now we will do what is best for our people, our interests”.
“We have fought an imposed war inside our country as our war at a very heavy cost of sweat and blood and loss to our socio-economic fibre,” said the prime minister while addressing a jirga, or tribal assembly, in North Waziristan district of Khyber-Pakhtunkhwa.
Prime Minister Imran Khan, along with army chief General Qamar Javed Bajwa visited North Waziristan, according to the military’s media wing, the ISPR. It was his first visit to the erstwhile tribal region since assuming the office.
Pakistan Army had launched a massive operation in North Waziristan, codenamed Zarb-e-Azb, in June 2014 to purge the region of local and foreign terrorists. The command and control centre of terrorists was destroyed in the operation which was later extended to hunt down financers and sympathisers in the urban centres of the country.
Hundreds of terrorists were killed while the remaining slipped across the porous border into Afghanistan. The successful operation resulted in a marked decrease in terrorist violence in the country.
“No other country or their armed forces have done what Pakistan and its armed forces have done in the war against terrorism,” the ISPR quoted the prime minister as saying at the Jirga where tribal elders from North and South Waziristan were in attendance.
Earlier, the prime minister laid a floral wreath at the ‘Martyrs’ Monument’. He was briefed about the operations conducted, ongoing stability operations, rehabilitation of TDPs (temporarily displaced persons), socio-economic development projects and fencing along the Pak-Afghan border.
The premier visited the terminal at Ghulam Khan border crossing, where he also witnessed the border fencing.
Speaking at the Jirga, Premier Imran greatly appreciated the people of former tribal regions who have gone through very challenging and difficult times while facing terrorism. He hailed the achievements of army, all other security forces and intelligence agencies for their successful operations against terrorists.
“We are for peace beyond borders, including in Afghanistan,” the premier said. “We shall play our role in the Afghan peace process along with other stakeholders as peace in Afghanistan is critical for achieving enduring peace in Pakistan.”
He paid rich tribute to the martyrs and their families who have sacrificed so much for the safety, security and prosperity of the people of Pakistan.
The prime minister announced various welfare packages for the newly established districts of erstwhile Fata. He announced establishment of a university, cadet college and jobs, including enrolment in the law enforcement agencies.
“A new Pakistan is in the making”, Imran said at the end.
Key federal and provincial ministers, K-P’s governor and chief minister accompanied the prime minister.
Earlier, the tribal elders demanded that the government launch a housing scheme in North Waziristan. They also sought funds for the construction of a college in Miramshah, the main town of North Waziristan, and a university and grid station in the district.
They also sought more funds for TDPs, and reconstruction of the homes. 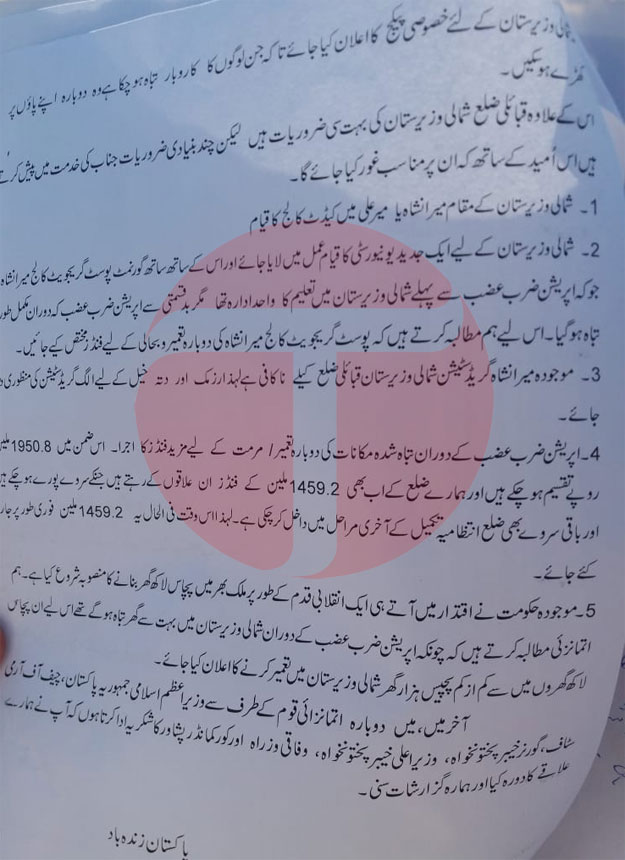 Absolute peace to be ensured at every cost, asserts COAS