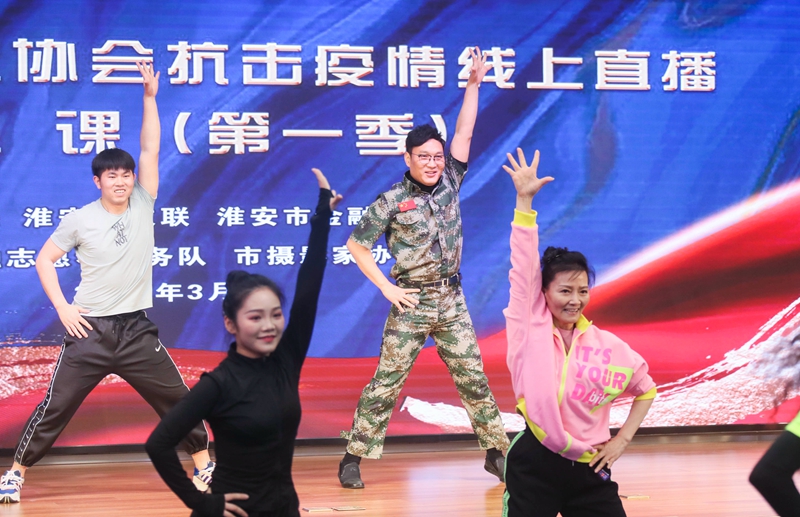 The past two months have been an emotional rollercoaster for He Ting. Since mid-March, the building where she resides in Shanghai has been under lockdown due to COVID-19. At first, despite a hint of concern, the previously busier-than-a-bee animator felt mostly relieved as she could take a little break from everything and just relax. Mere days into the lockdown, however, her mind was in a fog, and then boredom set in.

But when He accidentally came across a home fitness live-stream on short video platform Douyin, China’s version of TikTok, she quickly picked up the routine. “I could just feel dopamine released and pumped through my body and I’ve been diligently following the sessions ever since,” she told Beijing Review, adding that even though staying home ensures she is less likely to be infected by the virus and thus safer, the workout helps her to maintain both physical and psychological health. One has to be safe, true, but also sane.

And He’s not alone. Many are flocking to online workouts as the pandemic has, more than ever, made them realize the importance of staying healthy.

The influencer He has been following is Liu Genghong. Previously a singer, songwriter and actor, Liu has become an online sensation with his regular workouts on social media platforms. Within one month, Liu’s live-streams were viewed nearly 100 million times, with his most popular single live session attracting over 40 million views. His Douyin following alone has now rocketed to 61 million, increasing tens of millions within weeks.

Liu’s exercise videos feature fast-paced dance and aerobic moves set to pumping background music by pop singer Jay Chou, who also happens to be his friend. The rhythm and, on the face of it, easy movements, combined with Liu’s detailed explanation and constant encouragement, are just some of the elements that make the sessions so popular.

In the videos, Liu’s wife Wang Wanfei also adds to the fun. Compared with Liu’s professional moves and seemingly endless enthusiasm, Wang, following all the steps, sometimes candidly shows she’s exhausted, but still hanging in there—like many of her hubby’s followers.

Aside from those wanting to stay fit, people who intend to lose weight also account for a large proportion of Liu’s audience. Li Wei, a 25-year-old office clerk in Beijing, believes that working out together with millions of others is far more effective than spending a lot of money on personal training offline.

Li said that before 2021, she’d spent at least 10,000 yuan ($1,514) every year on gym classes, but despite that she never really achieved any noticeable difference in her appearance. As the pandemic spread, her gym closed down from time to time, forcibly interrupting her exercising habits. “But this year, I started following Liu and his routines. I was surprised to see their slimming effect in the mirror within the first two weeks,” she explained.

The online fit biz has seen a significant surge in China since the pandemic first erupted in 2020. According to a Douyin report from late March, the number of fitness influencers with more than 10,000 fans had exceeded 60,000 as of December 2021. The number of workout videos in 2021 increased by 134 percent, while followers of such content were up by 208 percent compared with the previous year.

“I always hear people say they stopped working out due to a lack of time and space, or not being able to afford a gym membership. But now, with the rise in online workouts, these excuses are no longer valid,” Wang Tao, a personal trainer in Beijing, told Beijing Review.

Wang Tao also said that the exercise-crazed population is expanding in line with the new trend, covering more senior citizens and children than ever before.

Online exercise also leads relevant industries to thrive. According to the 2022 Spring/Summer Sports and Fitness Consumption Trend Report, published in April by Jingdong Institute of Consumer and Industrial Development under e-commerce giant JD.com, the sales of yoga and dance-related items have been on the up since March. The sales of yoga pants, shoes and bags, for example, increased by 868 percent, 816 percent, and 104 percent, respectively.

Similarly, according to a report published by retail platform Meituan, during the five-day May Day holiday starting on April 30 this year, online orders of yoga mats, foam rollers and other indoor fitness products in Beijing increased by 29 percent month on month; among these, mat sales increased by 50 percent.

China boasts a vast potential fitness market. According to a China Insights Consultancy report, China was home to 300 million workout enthusiasts in 2021, ranking first in the world. However, their average annual expenditure in 2021 came to 2,596 yuan ($393), far below the 14,268 yuan ($2,183) in the United States.

“Regardless of whether the ‘Liu Genghong phenomenon’ will be short-lived or not, the national fitness wave is destined to be a determined, long-term one. To fully tap into this movement, online products and services must focus on consumer needs,” Huang Haidong, an expert from China’s online fitness platform Keep, told Ecns.cn, the official English-language website of China News Service. 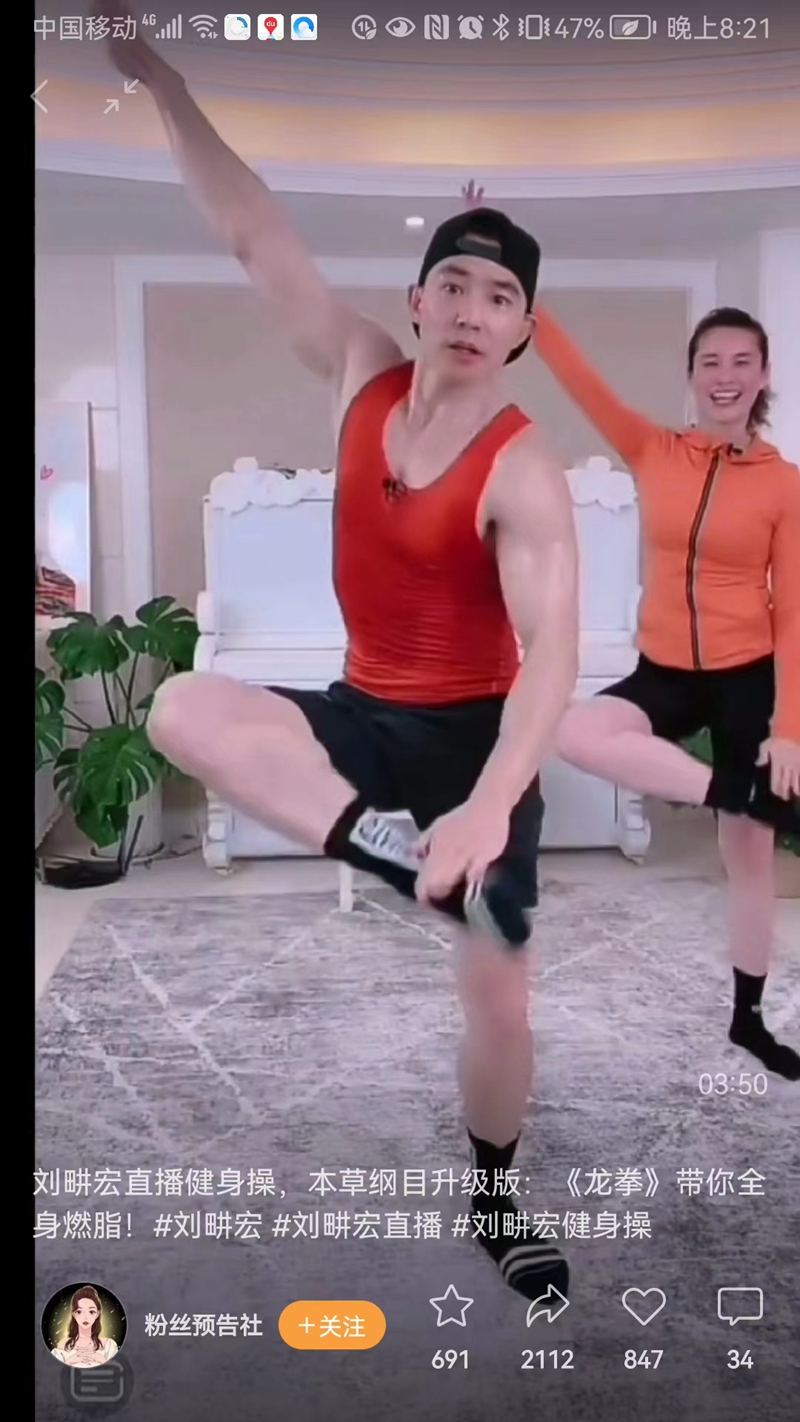 Screenshot of Liu Genghong and his wife teaching fitness

Liu’s smash hit is not the first of its kind. Before his sessions, the workout routines of Chinese influencer Zoey and German fitness model Pamela Reif, featured on online fitness platforms, had already created large fandoms, even before COVID-19.

At the national level, the State Council issued a circular on the further promotion of sports during the period of the 14th Five-Year Plan (2021-25), a blueprint for the country’s economic and social development.

The circular listed eight objectives, including stepping up the development of public sports venues and facilities, hosting more sports events and competitions, and advancing the high-quality expansion of the sports industry.

For instance, all the Olympic and Paralympic Winter Games Beijing 2022 venues are now open to the public. The National Speed Skating Oval, for instance, is slated to become a multi-functional complex combining sports competitions, national fitness and cultural events like exhibitions.

On April 28, the General Administration of Sport, the government agency responsible for everything athletics-related in China, launched online sport competitions that contestants can participate in by uploading their videos. Its official websites now feature videos of workouts, warm-ups and cool-downs, accessible to all. “The games aim to inspire mass fitness enthusiasm,” Ding Dong, an official with the administration, said.

Nevertheless, Wang Tao believes that professional guidance, especially one on one, should not be overlooked, as some people do get hurt from over-exercising or going about it the wrong way.
-The Daily Mail-Beijing Review news exchange item