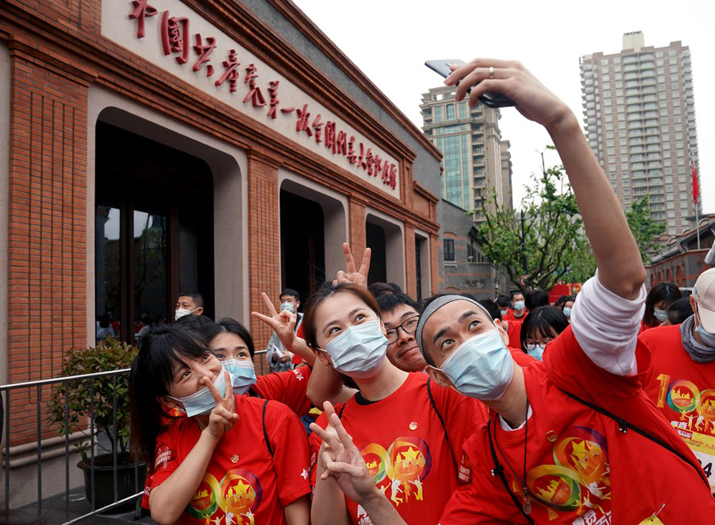 On the sidelines of a meeting between President Xi Jinping and his Argentinian counterpart Alberto Fernandez in Beijing earlier this year, Argentina’s Ambassador to China Sabino Vaca Narvaja told Xi in Chinese that without the Communist Party of China (CPC), there would be no new China.

“Thank you for your support,” Xi, who is also general secretary of the CPC Central Committee, replied with a smile. A short video capturing this brief conversation went viral online. Narvaja’s comments resonate at home and abroad as a growing number of people have come to recognize the CPC’s role in spearheading China’s progress.

The Party is scheduled to convene its 20th National Congress in the second half of 2022, the 101st year after its founding and the 73rd year it has governed the world’s most populous country. In certain quarters of international society, however, the word “communism” remains a taboo, and the CPC continues to be purposefully vilified, often with ulterior motives, a stark reminder of the ideological hostilities during the Cold War.

This is unfortunate and needs to change. A revisit of the CPC’s beliefs and how it applies them in China’s governance may shed light on why China bashers’ rhetoric is untenable. 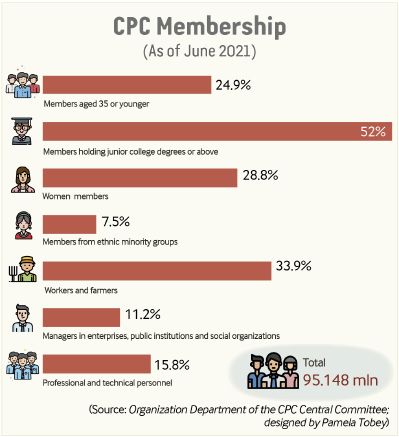 The CPC is not an elitist ruling bloc that puts itself above those it governs. Its more than 95 million members account for roughly 6 percent of the Chinese population. Together with those around them, such as their relatives and friends, they form a social network that represents a large proportion of Chinese society.

They do not live a privileged life. Nevertheless, they are considered more progressive as they share a strong commitment to the greater good—making China a better place. Indeed, the CPC’s motto is “serve the people.” For instance, among the 43,000 medical workers who poured into Hubei Province from other parts of China to lend a helping hand after the novel coronavirus hit the central province in early 2020, 24,000, or 56 percent of the total, were Party members, according to the Party’s official newspaper, People’s Daily.

Unlike in many Western countries where the government is viewed as an often self-serving necessary evil, the Chinese Government has earned a much higher degree of trust from the people, who see it as a strong and effective agent of positive change.

The 2022 Edelman Trust Barometer, the latest annual credibility poll conducted by the world’s largest global public relations consultancy, showed the level of trust among Chinese citizens in their government was 91 percent, as opposed to 39 percent in the U.S.

Part of the reason why the Party enjoys popular support is that it works and thinks together with the public. From mayoral office hotlines through which residents can lodge complaints and make inquiries to online polls on laws and state policies, the public have accessible channels to make themselves heard.

When formulating the 14th Five-Year Plan (2021-25) and Long-Range Objectives Through the Year 2035, an agenda that outlines major economic and social development goals, a survey was conducted on the Internet in August 2020. Upward of 1 million comments were posted. The drafting team made hundreds of edits based on them. From July to September that year, Xi held meetings with entrepreneurs, scientists, economists and experts from other areas to pool their wisdom. He also took fact-checking trips to a number of provinces. The non-CPC political parties were consulted as well. By giving consideration to the aspirations of all layers of society and building consensus, the plan became both visionary and workable. This is just one example of how the Party exercises its leadership—proposing policies based on extensive research and consultation and implementing them through public engagement.

Indeed, had it not been for its rapport with the people, the Party could not have come to power in the first place. The Chinese chose the CPC to lead them after long-term social experimentation. Following the Revolution of 1911 that overthrew the Qing Dynasty (1644-1911), numerous attempts were made to introduce Western political systems that some thought may save the time-honored civilization from its decline. These included the parliamentary system, the multiparty system, and the presidential system, none of which could be executed as they were not suited to China’s national context. From 1912, when the first cabinet was established, to 1928, the head of state was replaced 10 times and the prime minister 59 times, and the cabinet was reshuffled 45 times. The longest term of office was less than one year, while the shortest was less than one day.

The CPC established its leadership as it gained nationwide recognition, including that of other political parties, in the fight against the one-party dictatorship of the Kuomintang and in the struggle against Japanese aggression.

That is not to say the CPC does not err. But it has faced up to its mistakes, acknowledging them, and correcting its course. By drawing lessons from the “cultural revolution,” a tumultuous political movement that took place from 1966 to 1976 and caused great harm, the Party laid the groundwork for socialism with Chinese characteristics—a successful path that has delivered results that speak for themselves since reform and opening up began in the late 1970s.

Self-revolution is the norm. Since Xi took the helm in 2012, efforts have only been intensified. This began at the top. Shortly after he took office, the Political Bureau of the CPC Central Committee adopted eight rules aimed at improving Party and government conduct. For instance, one of the rules calls for Political Bureau members, the Party’s highest-ranking officials, to visit local communities, acquire a firsthand knowledge of what is going on and help those working on the ground tackle difficulties.

A landmark document on the Party’s historical experiences issued in November 2021 noted there was “a certain period in which we failed to supervise Party organizations effectively or govern them with the necessary stringency.” This resulted in problems such as privilege seeking and a startling level of corruption that damaged the Party’s prestige.

Against this backdrop, Xi said “it takes a good blacksmith to make good steel” and China’s success hinges on the Party, especially on the Party’s efforts to exercise effective self-supervision and rigorous self-governance.

The eight rules, the principles of which bind all public sector employees, do have teeth. Official statistics show since 2012 hundreds of thousands have been held accountable for violating them.

The CPC has stuck to a zero-tolerance approach to corruption. Those expelled from the Party and brought to justice included Zhou Yongkang, a former Political Bureau Standing Committee member. In 2015, Zhou was sentenced to life imprisonment for accepting bribes, abusing his power and leaking state secrets.

Following the disintegration of the Soviet Union, U.S. political scientist Francis Fukuyama described the event as the “end of history,” and argued that the U.S. version of democracy is the final form of government. However, in a January article for The New York Times, marking the first anniversary of the Capitol riots, Fukuyama admitted that his argument back then had underestimated “the difficulty of creating a modern, impartial, incorruptible democratic state and the possibility of political decline in advanced democracies.”

The CPC, for its part, is always mindful of that difficulty. With strict discipline in place to regulate members’ conduct, it intends to institutionalize effective, streamlined governance in a large, diverse country that has yet to make the most of its development potential. It has never meant to impose a repressive, authoritarian regime, something that the Party has categorically rejected since its founding.

The upcoming 20th CPC National Congress will prove another opportunity both for the CPC to show its true colors and for the world to observe the Party closely. Despite Western media speculations on the leadership transition, one thing is certain: A capable team will be elected through an orderly and lawful process to steer China down its unique path.
-The Daily Mail-Beijing Review news exchange item