“Since the 18th National Congress of the Communist Party of China in 2012, the industry and information technology sector has achieved remarkable growth, with the industrial system and the industrial chain becoming more complete, and the overall strength, quality, innovation capacity, competitiveness and risk-resistance capability being significantly improved,” Xin Guobin, Vice Minister of Industry and Information Technology, said at a press conference on June 14.

From 2012 to 2021, the country’s industrial value-added output, an important economic indicator, grew from 20.9 trillion yuan ($3.11 trillion) to 37.3 trillion yuan ($5.56 trillion); the resilience and competitiveness of industrial and supply chains have improved; the world’s largest network of infrastructure has been built, using leading technology for reliable operation, and a large number of major innovation results have taken Chinese manufacturing to new heights. 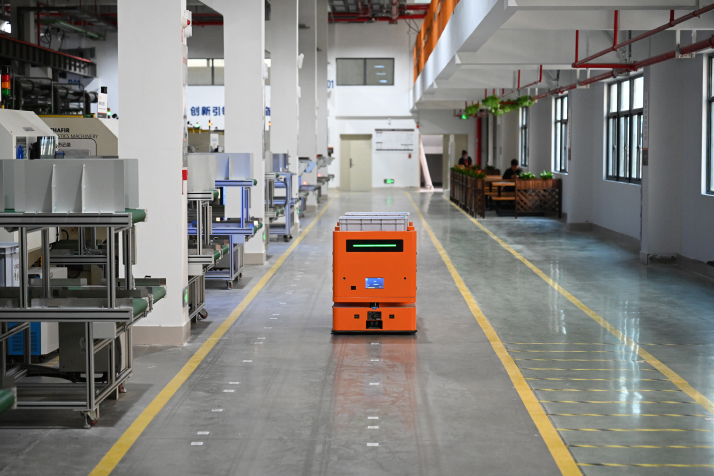 An autonomous vehicle transports materials in a lighthouse equipment factory in Nan’an, Fujian Province, on May 18 (XINHUA)

China’s manufacturing value-added output came in at 31.4 trillion yuan ($4.67 trillion) in 2021, accounting for 30 percent of the global total, up from 16.98 trillion yuan ($2.5 trillion), or 22.5 percent, in 2012. The proportions of hi-tech manufacturing and equipment manufacturing in the value-added output of leading industrial enterprises increased from 9.4 percent and 28 percent in 2012 to 15.1 percent and 32.4 percent in 2021, respectively. Output and sales volume of new-energy vehicles had been first in the world for seven years in a row until 2021. These figures released at the press conference show the robust development of the manufacturing industry over the past decade. Moreover, the transformation and upgrading of traditional industries have been accelerating, and digital and green transformations are also advancing.

During this time, China made notable progress on innovation in key areas. The Fendouzhe (Striver) deep-sea manned submersible reached Earth’s deepest part of the Mariana Trench and completed 21 10,000-meter deep-sea dives. Major breakthroughs were made in the research and development of the C919 large passenger aircraft, which will soon be certified for airworthiness and delivered to customers. The C919 is China’s first homegrown jetliner, with a capacity of 158 to 174 seats and a range of up to 5,555 km. The project started in 2008 and the plane completed its successful maiden flight in May 2017.

Xin said over the past decade, the country has made great efforts to address overcapacity, with 140 million tons of production capacity for substandard steel cleared and the outdated production capacities of electrolytic aluminum, cement and other industries almost totally shut down. Key industries such as new-energy vehicles and smartphones have become world leaders, and a large number of advanced manufacturing clusters have been formed in sectors such as electronic information and rail transportation.

However, Xin said there are still some problems in industrial development and information technology application. For instance, supply-side progress cannot keep up with the needs of consumption upgrading, there are still many weak points in the major areas and key links of industrial and supply chains, and some small and medium-sized enterprises are facing new challenges in modernizing their production and business operations. 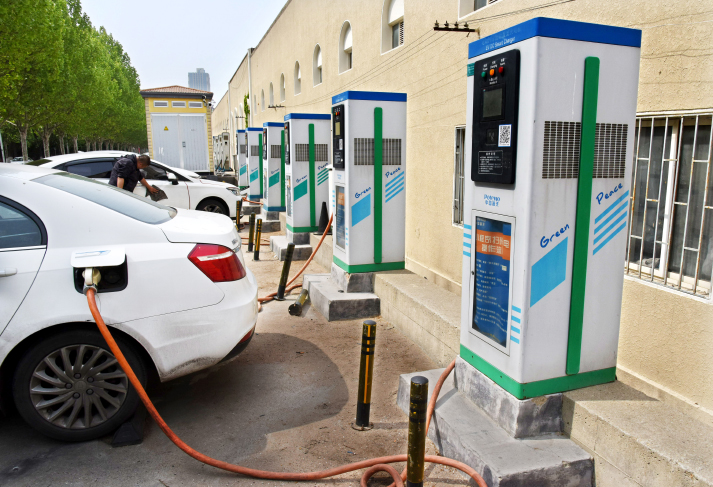 Electric cars at a charging station in Qingdao, Shandong Province, on May 11 (XINHUA)

Over the past decade, China has been accelerating its transformation from the “factory of the world” to a leading innovative country through promoting high-quality development of the manufacturing industry.

Self-reliance in major equipment is an important indicator of a country’s comprehensive strength and science and technology progress, Xu Xiaolan, another Vice Minister of Industry and Information Technology, said at the press conference.

Since 2012, China has taken research and development of major equipment as a priority in transforming itself into a manufacturing power, Xu added. Focusing on key fields such as advanced key transport equipment, ship and marine engineering equipment as well as aviation and aerospace equipment, the country has overcome numerous technological bottlenecks and formed a number of industrial clusters across the country that have strong competitive advantages.

Take China’s integrated circuit sector as an example. Its sales revenue exceeded 1 trillion yuan ($149 billion) for the first time in 2021, and the compound annual growth rate from 2018 to 2021 reached 17 percent, more than three times the global average level during the same period, according to Xu.

“A number of homegrown key basic products and materials such as rail transport and power equipment are now able to meet domestic demand, and the country’s basic industrial capacity has been steadily improved,” Xin said.

Over the past 10 years, China has focused on fostering world-class enterprises, with the strength and competitiveness of manufacturing firms being significantly enhanced. A total of 73 Chinese industrial enterprises have ranked among the global top 500, and the proportion of sales revenues from new products in the total business revenues among leading enterprises rose from 11.9 percent to 22.4 percent, Xin said. 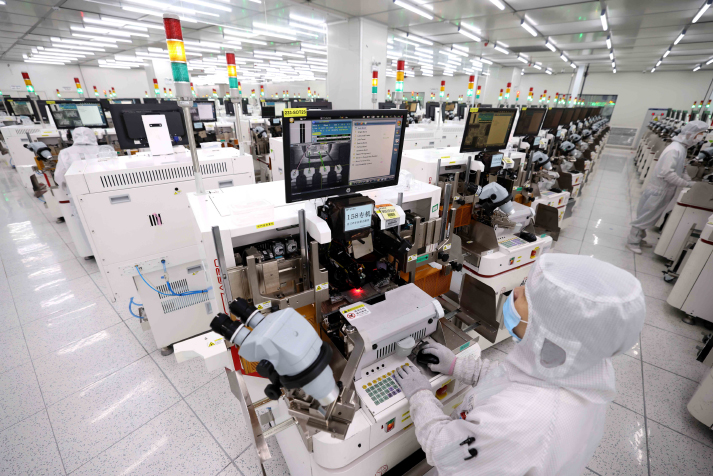 A workshop of a microelectronics company in Hefei, Anhui Province, on May 26 (XINHUA)

Digital economy matters a lot for the nation’s overall development. Over the past decade, the information and communications industry has achieved leapfrog development, consolidating the foundations of a digital China.

A press release from the Ministry of Industry and Information Technology (MIIT) showed China has set up the world’s largest and most technologically advanced fiberoptic broadband and mobile communication networks, and all prefecture-level cities have been covered with fiberoptic networks. In addition, China’s 4G base stations now account for more than half of the world’s total and the country has built 1.62 million 5G base stations, serving 413 million users.

Digital applications continue to expand from consumption to production, Han Xia, chief engineer with the MIIT, said at the press conference. E-commerce, e-governance and telecommuting have become part of daily life for many Chinese people, and the volume of transactions via mobile payment in China has exceeded 527 trillion yuan ($78.54 trillion). The new generation of information and communications technology represented by 5G is more widely used in many sectors.

Driven by new technologies and novel applications, the innovation capability of the Chinese manufacturing industry continues to grow. High-quality telecom services at lower prices have been promoted in greater breadth and depth; for the first time in history, broadband access has been realized in all administrative villages across the country; the “faster network, lower fee” policy has been implemented in more areas; faster progress has been achieved in the transformation of Internet applications so that senior citizens, the disabled and other groups with special needs can also share the benefits of information and communication technology development.

“Major public concerns such as telephone and online fraud have been effectively addressed,” Han said. A data security management system has taken shape in the field of industry and information technology, and a security guarantee system has been established for the industrial Internet and other new facilities, significantly improving industrial enterprises’ comprehensive cybersecurity strength, she concluded.

What is socialism with Chinese characteristics?