‘Comprehensively advancing law-based governance is an essential requirement and important guarantee for socialism with Chinese characteristics,” reads the Resolution of the Communist Party of China (CPC) Central Committee on the Major Achievements and Historical Experience of the Party Over the Past Century, which was adopted at the Sixth Plenary Session of the 19th CPC Central Committee in November 2021.

Solid progress has been made in advancing the rule of law in China since the 18th CPC National Congress in 2012. Top-level designs and major plans have been put forward to ensure sound legislation, strict law enforcement, impartial administration of justice, and observance of the law by all.

Advancing the rule of law has been incorporated into the Four-Pronged Comprehensive Strategy for the country’s development, put forth by President Xi Jinping in 2014, which also consists of completing the building of a moderately prosperous society in all respects, expanding in-depth reform and enforcing strict Party self-governance.

Also in 2014, the Fourth Plenary Session of the 18th CPC Central Committee adopted a decision to advance the rule of law. Then after the 19th CPC National Congress in 2017, the CPC Central Committee established its Commission for Overall Law-Based Governance and made major decisions on promoting law-based governance in all fields.

The Party has emphasized that law-based governance should reflect people’s interests and wishes, protect their rights, enhance their wellbeing, and protect and promote social fairness and justice, according to the 2021 decision. 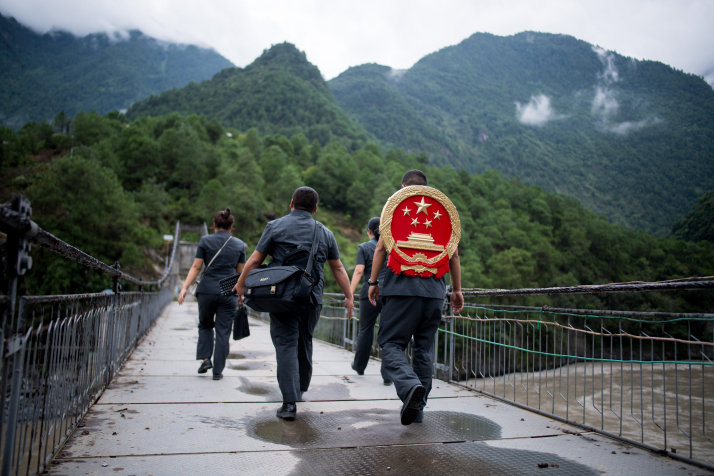 China’s legal system has become more full-fledged in the past decade.

Since 2012, 68 new laws have been enacted and 234 laws have been amended by the National People’s Congress (NPC) and its standing committee. This has brought the country’s total number of effective laws to 292.

“The number of new laws enacted over the last decade has increased by one third compared with the decade before, and the number of laws amended has nearly doubled,” Xu Anbiao, deputy head of the Legislative Affairs Commission of the NPC Standing Committee, said while summing up China’s legislative progress at a press conference on April 25.

Amendments to the Constitution were adopted at the First Session of the 13th NPC in 2018. The amendments have established the guiding role of Xi Jinping Thought on Socialism with Chinese Characteristics for a New Era in China’s political and social life, and underline the importance of the Party’s leadership.

Supervisory commissions have been written into the Constitution as the supervisory organs of the state, and by bringing all public power under supervision, the Party’s leadership in the anti-corruption efforts is strengthened.

Related provisions were also revised to implement the Five-Sphere Integrated Plan to promote coordinated economic, political, cultural, social, and ecological advancement and the second centenary goal of building China into a great modern socialist country in all respects by 2049, when the People’s Republic of China (PRC) celebrates its 100th birthday.

In addition to the amendments, efforts have been made to uphold the authority of the Constitution, including designating December 4 as the National Constitution Day, and mandating all officials to swear allegiance to the Constitution upon taking office. The country has also established an inspection system to ensure all laws and regulations are in strict compliance with the Constitution, Xu added.

Another milestone in Chinese legislation during the last decade is the adoption of the Civil Code, the first of its kind in the PRC.

Xu hailed it as a “major achievement in advancing socialist rule of law with Chinese characteristics” and said that “it has incorporated socialist core values and the concept of green development into civil legal norms.”

The Civil Code comprises sections on real rights, contracts, personality rights, marriage and family, inheritance, and tort liabilities, as well as general and supplementary provisions. It addresses issues that people are concerned with, including new problems emerging from such areas as urbanization, environmental protection, plus the application of artificial intelligence and other digital technologies.

China has also enacted or revised more than 20 laws directly related to national security in the past decade, Tong Weidong, an official with Legislative Affairs Commission of the NPC Standing Committee, said at the press conference.

These include the National Security Law enacted in 2015, and laws on counter-espionage, counter-terrorism, cybersecurity, biosecurity, and nuclear safety. The Law on Safeguarding National Security in Hong Kong Special Administrative Region, which went into force in 2020, has played a significant role in putting Hong Kong society back on the right track, said Yang Zhaoye, head of the research office of the committees of Hong Kong and Macao basic laws under the NPC Standing Committee, at the press conference.

The Criminal Law has also been amended. “The application of the death penalty has been further reduced, and the community correction system has been improved,” Yue Zhongming, a spokesperson for the Legislative Affairs Commission of the NPC Standing Committee, told the press conference.

Moreover, the lawmaking process has embodied the concept of whole-process people’s democracy. “The voice of the people can be heard in all stages of law making, including the drafting, deliberation and adoption of a law, so as to ensure that the legislation reflects the common will of the people,” Xu said.

In the past, only the first draft of a law was published to solicit public opinions, whereas now, after the first draft has been revised according to public feedback, the second draft will also be published for public comment.

Another important area of progress is the establishment of community-level legislative outreach offices. At present, 22 such offices have been established nationwide and comments have been collected via the platforms for more than 130 laws, Xu said. 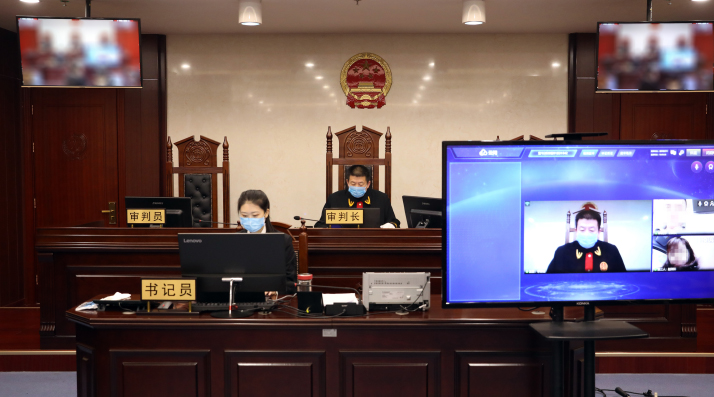 In the past decade, efforts have also been made to advance reform in the judicial, procuratorial, and public security domains to ensure the fairness, integrity, efficiency and authority of law enforcement and judicial work.

“Focus has been placed on removing bottlenecks that undermine judicial fairness,” said Shen Liang, Vice President of the Supreme People’s Court (SPC), at a press conference on April 22.

In 2015, courts changed their case filing procedure from accreditation to registration. Now more than 95.7 percent of cases can be filed upon submission, according to Shen.

The difficulty in executing court rulings has also been tackled. Shen said the SPC has set up an online system to precisely locate dishonest people who are subject to enforcement and their properties. The information of defaulters is published according to law and their nonessential consumption is restricted.

Through reforming the litigation system, the quality and efficiency of case handling have improved. Reform measures that have been piloted include imposing lenient penalties on those who admit their guilt and accept punishments in criminal cases, and the application of quick trials for simple cases.

Shen said Chinese courts have strictly adhered to the principles of legality, evidence-based judgment and presumption of innocence, so as to ensure that fair rulings are given to the guilty and the innocent are protected from criminal punishment.

Reform has also been carried out to hold judges accountable for the cases they adjudicate; give play to the oversight role of tribunal and court presidents, and strengthen the supervision and management of important, difficult or complex cases; and make the handling and supervision of cases traceable throughout the whole process.

In order to prevent the interference of stakeholders on law enforcement and judicial activities, measures have been taken to strengthen the supervision of procuratorial organs over judicial work, expand the participation of jurors in trials, and other channels for people to participate in and supervise law enforcement and judicial activities, Jing Hanchao, Deputy Secretary General of the Commission for Political and Legal Affairs of the CPC Central Committee, said at the press conference. 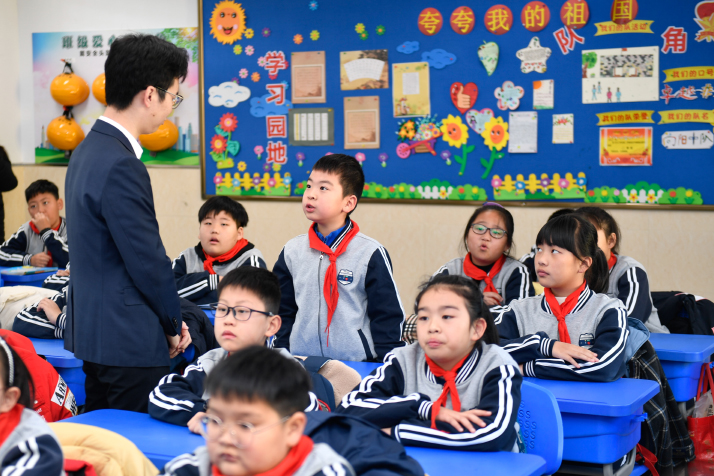 A lawyer volunteers to instruct primary school students on the Constitution in Huzhou, Zhejiang Province, on December 3, 2021 (XINHUA)

The related legal provisions, procedures and results of law enforcement and judicial work are disclosed so that people can witness how justice is delivered, Jing said. China has made public court proceedings and judgments, trial procedures and the execution of effective judgments, as well as reasons for any ruling.

In addition to courts, procuratorial organs have also taken measures to ensure judicial fairness. Yang Chunlei, Deputy Procurator General of the Supreme People’s Procuratorate (SPP), said at the press conference that the SPP has made great efforts in rectifying wrongful convictions, holding those behind the decisions accountable, and stepping up oversight to prevent negligence of duty and abuse of power.

In the past decade, China has also made vigorous efforts to promote the digitization of justice. Case filing, fee payment, court hearings, investigation, document delivery and some litigation services can now be carried out online, Jing said, adding that some parties can now file a lawsuit using just a smartphone app.

Measures have also been taken to deliver justice to remote and rural communities. Circuit courts have been dispatched to serve local residents, handling case filing, mediations and trials, as well as overseeing execution of rulings on the spot. The coverage of legal assistance has also been expanded, with service available in almost all detention centers and courts.

The reform in the legal sectors has provided a strong guarantee for social and economic development in China, and enables people to enjoy safer lives. A survey conducted by the National Bureau of Statistics in 2021 showed that 98.6 percent of respondents felt safe living in the country.

“China has been recognized as one of the safest countries in the world,” Jing said.
-The DailyMail Beijing Reviews