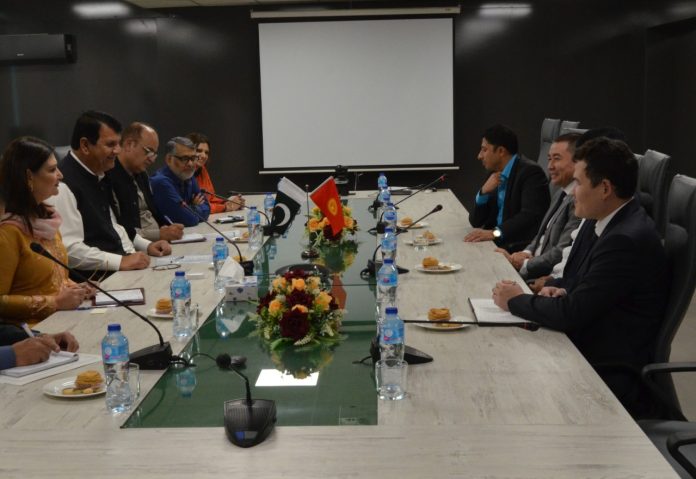 ISLAMABAD: Ambassador of Kyrgyzstan to Pakistan Ulanbek Totiuiaev called on adviser to prime minister for political, public affairs, national heritage and culture Eng. Amir Muqam here on Thursday and discussed matters of bilateral interest including cultural exchanges between the two countries.
Amir Muqam while talking to the Kyrgyz ambassador said Pakistan looked forward to strengthen its cultural and trade ties with Kyrgyz republic.
He said both countries should explore opportunities in the field of culture while exchanging cultural delegates which would go a long way in cementing diplomatic ties.
Speaking on this occasion, the Kyrgyz ambassador discussed matters of mutual collaborative activities, celebration of central Asian common cultural aspects and signing of memorandum of understanding (MoU) with Pakistan for the promotion of art and culture.
He also discussed the possibilities to exchange expertise in the field of literature and cultural heritage by translating the literature of both the countries into Urdu and Kyrgyz languages.
The Kyrgyz ambassador said strong bilateral ties between Pakistan and Kyrgyzstan reflect that both nations were ready to build cooperation which would continue to future decades.
Secretary National Heritage and Culture Division Fareena Mazhar and others were also present in the meeting.