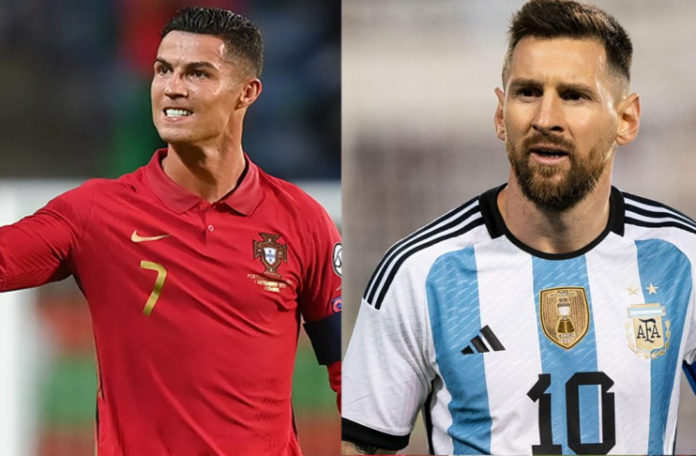 DOHA: Cristiano Ronaldo opened up on his relationship with long-term rival Lionel Messi, insisting that the two superstars shared a great amount of respect towards each other and hailed the Argentina star an amazing player.
The two have been regarded as the greatest footballers of their generation and shared one of the most enthralling rivalries on the pitch for almost two decades.
Both Ronaldo and Messi have won countless trophies during their illustrious careers and won the Ballon d’Or 12 times out of 13 times between 2008 to 2021, with the former Barcelona star claiming the award seven times compared to Ronaldo’s five. In the latest part of his explosive interview with Piers Morgan on Talk TV, the ex-Real Madrid superstar has heaped praises on Messi.
“Amazing player is magic, top..” he said. “As a person, we share the stage 16 years, imagine, 16 years we share. So, I have great relationship with him.”
“I’m not a friend of him in terms of, what I mean friend is the guy who was with you in your house, speaking on the phone, no, but it’s like a teammate.” he added.
Portugal forward further said: He (Messi) is a guy that I really respect the way he always speaks about me.
Even his wife or and my girlfriend, they always respect and they’re from Argentina.
“My girlfriend is from Argentina. So good. What I am going to say about Messi? A great guy who does great things for football.” Despite their iconic footballing careers, neither of the two legends has won the World Cup.
Although the two have not announced their retirement yet, the showpiece event in Qatar is said to be their last shot to win glory for their national sides. –Agencies

Spain out of FIFA W’Cup after defeated by Morocco