The way several high-profile accused in the Sohrabuddin Shaikh alleged fake encounter case were discharged, the “absurd” inconsistencies in the legal process, signs of witnesses under pressure or threat, evidence of “mischief” — all point to the “failure of justice and of the justice delivery system”.

These are among the series of observations made by Justice Abhay M Thipsay, a former judge of the Bombay High Court who ruled on four bail applications in the case, in an interview to Indian media. Speaking out for the first time on the case since he retired last year as judge of the Allahabad High Court in March 2017, Justice Thipsay said the Bombay High Court must exercise its powers of revision, even suo-motu if necessary, to relook at the case.

Describing as “absurd” the inconsistencies he found in orders passed by the special CBI court currently hearing the case in Mumbai, Thipsay said the court believed there was an abduction and a staged encounter but still discharged senior police officers. Several aspects of the case raise suspicion, he said, and are “contrary to common sense.

A number of accused were discharged by observing that the evidence against them is weak but on the same evidence, the trial court found there is a case for proceeding against some of the accused. “The version of the same witness, as reflected in police statements, has been believed in the case of some accused and disbelieved in respect of others discharged,” said Justice Thipsay.

“You believe that he (Shaikh) was abducted. You also believe that it was a fake encounter. You also believe that he was illegally kept in the farmhouse. And you don’t believe that Vanzara (then DIG Gujarat), Dinesh M N (then Rajasthan SP), or Rajkumar Pandiyan (then Gujarat SP) are involved in that. How could the constabulary or inspector-level officers have any contact with him (Shaikh)? You mean to say a sub-inspector abducted him (Shaikh) from Hyderabad and brought him to a different state? When, on the basis of the same material, you say that there is no case against the SPs (Pandiyan, Dinesh). So the suspicion is that superior officers have been treated differently,” he said.

“These orders need to be scrutinised properly before the appropriate fora, and the High Court should look into it,” he said. “It is unusual that bail is denied to a number of accused for several years and then the court holds that there is no prima facie case against those accused. Lower level officers are not discharged but senior officers are discharged though the nature of material against them is the same,” said Justice Thipsay. 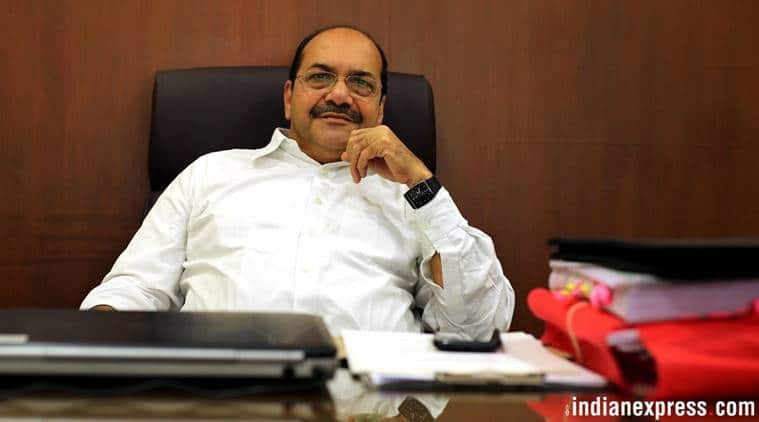 Justice Abhay Thipsay at his office in Khar. He said that he “started reflecting on the case owing to the controversy” related to the death in 2014 of CBI judge B H Loya who was hearing the matter. (Express photo/Janak Rathod)

Questions over grant of bail

Fifteen of the 38 accused have been discharged in the case, which is being heard by a CBI court in Mumbai. Those discharged include BJP president Amit Shah, who was then a Gujarat Minister of State for Home Affairs and, Gulab Chand Katariya, then Rajasthan home minister, apart from Vanzara and Pandiyan.

With 30 witnesses in the ongoing trial of 22 accused turning hostile since November 2017, Justice Thipsay said, “There are many unnatural things that I saw when I started looking at the orders about how discharge orders have been passed in the case.”

As a judge of the Bombay High Court, Justice Thipsay heard the bail applications of Vanzara, and M Parmar, former DySP, of Gujarat’s Anti-Terrorism Squad; Narendra K Amin, DySP, Ahmedabad Crime Branch; and B R Chaubey, sub-inspector, Gujarat Police. He rejected two and granted bail to Amin in 2013 and Vanzara in 2014.

Justice Thipsay said he was reluctant to grant bail to Vanzara but the Supreme Court had already granted bail to other accused in the case on grounds of prolonged incarceration. Hence, he said, a departure from the view of the apex court would not be proper exercise of judicial discretion or discipline.

“I was very uneasy because I knew the facts of the case roughly as I had dealt with bail applications of some of the accused. Fifteen of the 38 accused had been discharged. I was not very comfortable in granting bail to Vanzara but I had to grant it because of a Supreme Court order granting bail to co-accused Rajkumar Pandiyan and (B R) Chaubey. However, in my order, I made it clear that there was a prima facie case against him (Vanzara). That is why I am particularly pained because they (trial court) did not pay heed to that. I said there is a prima facie case and that there is a very heinous crime also,” he said.

Justice Thipsay said that he “started reflecting on the case owing to the controversy” related to the death in 2014 of CBI judge B H Loya who was hearing the matter. “I don’t want to comment on the death but to say it was unnatural would be far-fetched. That, I don’t believe. But Loya’s CDRs (call detail records) should be seen,” he said.

Loya, an Additional Sessions judge since 2011, was appointed as Registrar Judicial II in the Bombay High Court in February 2014. In four months, he was transferred back to the sessions court and appointed special CBI court judge presiding over the Sohrabuddin case.

“This was too short a period. When a person is appointed in the registry you don’t have plans of immediately sending him back. This is an unusual thing… Before that Utpat was transferred abruptly. Why do I say abruptly? Transfers are made generally after three years unless there are extraordinary circumstances. He had not completed three years,” he said.

In 2012, at the time of transferring the fake encounter case from Gujarat to Maharashtra, the Supreme Court had directed the administrative committee of the Bombay High Court to ensure that the trial be conducted by the same judicial officer from beginning to end.

Why the need for secrecy?

Justice Thipsay described the media gag order issued last November by special CBI judge S J Sharma presiding over the trial as “very surprising” — the order was struck down by the Bombay High Court. “Usually, a person who is facing prosecution feels safer if it is done in public gaze. Open trial is the best sort of protection for an accused… Here is a case in which the accused made an application praying to the court that the media be prohibited from publishing proceedings of the case. The trial court had passed such an order which was subsequently struck down by the High Court. The question is how could the accused feel safe when the public would not know what was happening in the courtroom? That is very surprising, according to me,” he said. The case dates back to November 2005 when Shaikh was said to have been travelling in a Sangli-bound bus from Hyderabad along with his wife Kausarbi and associate Tulsiram Prajapati. A police team allegedly chased the bus and forced the three to alight and eventually took them to Ahmedabad where Shaikh was killed. Kausarbi, who was a witness to the incident, was also killed but the investigators were never able to trace her remains. Prajapati was also killed in 2006.

Of the 38 accused in the case initially named by the CBI, the CBI court framed charges including murder, criminal conspiracy, destruction of evidence against 22 persons with the High Court having stayed the framing of charges against IPS officer Vipul Aggarwal.

Besides the trial in the CBI court, the Sohrabuddin case is the subject of cases in the High Court and the Supreme Court, too. Three revision applications filed by Sohrabuddin’s brother Rubabuddin challenging the discharge of Vanzara, Dinesh and Pandiyan are before the Bombay High Court. Also before the High Court are two revision applications filed by the CBI challenging the discharge of Rajasthan Police’s Dalpatsingh Rathod and Amin. There is also Aggarwal’s petition. The Supreme Court is hearing five petitions seeking an independent inquiry into the death of judge Loya.

Before his elevation to the Bombay High Court, Justice Thipsay served as a judge of the City Civil and Sessions Court and presided over the Vadodara Best Bakery retrial, a case also transferred to Mumbai from Gujarat. In February 2006, he convicted nine and acquitted eight accused in the case. Fourteen people were killed when a mob set fire to Best Bakery on the outskirts of Vadodara on March 1, 2002, during the Gujarat riots.

RAW hosts secret Conference with Spymasters from over 20 countries