ISLAMABAD: In an unprecedented verdict that deals another blow to the deposed premier Nawaz Sharif, the apex court has held that if it declares that a lawmaker is not ‘Sadiq’ and ‘Ameen’ – truthful and trustworthy – under Article 62 (1) (f) of the Constitution then he will be permanently disqualified to contest elections.
“We are inclined to hold that the incapacity created for failing to meet the qualifications under Article 62(1)(f) of the Constitution imposes a permanent bar which remains in effect so long as the declaratory judgment supporting the conclusion of one of the delinquent kinds of conduct under Article 62(1)(f) of the Constitution remains in effect,” said the Supreme Court’s much-awaited judgment.
The 52-page verdict was authored by Justice Umar Ata Bandial, who is also in line to eventually become chief justice of Pakistan (CJP) in 2022.
His verdict was also endorsed by other four members of the larger bench that heard the case, including CJP Nisar, Justice Ijazul Ahsan, Justice Sajjad Ali Shah, and Justice Azmat Saeed Sheikh. However, Justice Sheikh has not agreed with the reasoning of the majority verdict.
Interestingly, the verdict has negated the views of its two amicus curiae, Muneer A Malik and Ali Zafar. It has also rejected the contentions of (late) Asma Jahangir, Sakindar Bashir Mohmand, Sardar Aslam, Kamran Murtaza, who were opposing lifelong disqualification under this provision of the Constitution.
However, the verdict has fully endorsed the arguments of two lawyers of Pakistan Tehreek-e-Insaf (PTI) Babar Awan and Chaudhry Faisal Hussain. The verdict o is another setback for Nawaz Sharif, who was firstly disqualified as MNA last year and later he was declared ineligible to head his party.
Senior PTI leader Jahangir Khan Tareen also stands permanently disqualified in view of this verdict, as do dozens of lawmakers who were declared ineligible on the basis of holding fake degrees and dual nationalities. 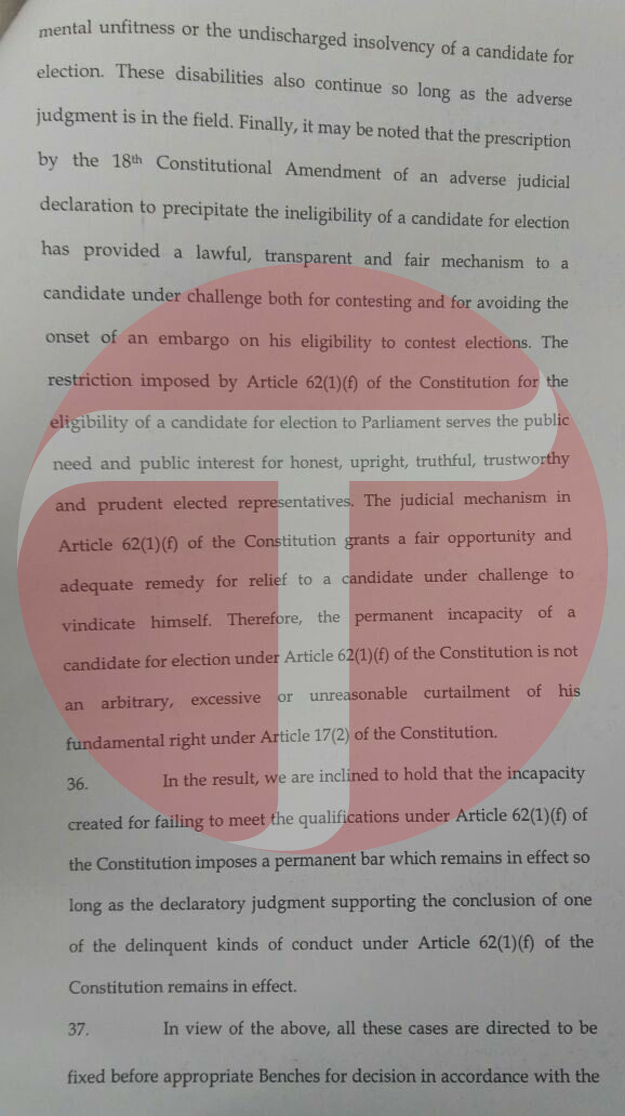 The judgment noted that the prescription by the 18th Constitutional Amendment of an adverse judicial declaration to precipitate the ineligibility of a candidate for election has provided a lawful, transparent and fair mechanism to a candidate under challenge both for contesting and for avoiding the onset of an embargo on his eligibility to contest elections.
Instead of referring the matter to the parliament for taking a final decision on the time duration of disqualification, the judge comprehensively discussed the importance of Article 62 (1)(f) of the Constitution. His main reliance is on Article 2A of Constitution as well as verses of the Holy Quran.
The verdict said that Article 62(1)(f) of the Constitution imposes Islamic ethical conditions for eligibility of a candidate for election to the parliament but these are made applicable to both Muslim as well as non-Muslim candidates for parliamentary membership.
“One reason that the conditions of Article 62(1)(f) are made a criterion of eligibility of all candidates for election is the universality of their ethical prescription. Their content constitutes a basic norm in all progressive democratic societies that are governed by the rule of law.
“It is a matter of fact that in Pakistan the members of parliament occupy leadership roles for the people of Pakistan and constitute the political and ruling elite in society. According to the preamble of the Constitution, these persons are representatives of the people of Pakistan to whom the former are ultimately responsible as fiduciaries.”
The court also reproduced current code of conduct of the members of United Kingdom.
It says that the universality of standards of honourable conduct in public life in the contemporary democratic world, irrespective of faith or culture, makes it plausible that firstly, the conditions of eligibility for election under Article 62(1)(f) of the Constitution are made applicable to all candidates for the parliament including non-Muslim candidates; and secondly, that these conditions have been retained by the elected parliament in the 18th Constitutional Amendment.
The court said the same constitutional provision was endorsed by 18th Amendment, wherein several adjustments were made that if the declaration by the court has attained finality, the embargo under Article 62(1)(f) of the Constitution acquires permanent effect.
“A court of law does not issue a declaration that offends mere sentiments or sensibilities. Consequently, a valid declaration by the court would involve the breach of a legal duty or obligation owed by the candidate for election to another person or the violation of the latter’s legal right or privilege”
The court said in our legal system the rights and duties of parties in a legal correlation are broadly speaking of two kinds, adding that one species concerns the breach of rights or duties involving the commission of criminal offences. The convictions after trial for such offences carry punishments including the capital penalty, imprisonment, proprietary forfeitures and pecuniary fines.
The other kind of legal correlation involves the breach of rights and duties that carry civil liability. A decree by a court of civil jurisdiction can grant pecuniary or specific relief, including, a declaration with respect to a legal right, status or legal character.
“Such a decree that is based on admissions or evidence and sustained by reasons attains finality after remedies before the higher fora are exhausted. A final decree has binding effect and is commonly described as a past and closed transaction having a permanent effect.
“Therefore, the consequence of permanent nature ie, incapacity, following a final and binding decree of a court of civil jurisdiction, is the ordinary and lawful outcome of civil litigation,” said the judgment.
Differentiating the Article 62 with Article 63, the judgment said retributive justice entails several serious consequences apart from deprivation of personal liberty of the convict. Such a convict, in fact, suffers a loss of life by being immobilised, endures the loss of his livelihood, watches disruption and hurt to his family and lives with the lasting stigma of a conviction on his reputation.
“It is, therefore, said that a convict, who has undergone a sentence of corporal punishment has ‘paid his dues to society’. Even after his release from jail, the convict faces many daunting challenges for rehabilitating himself in society as a responsible, productive and acceptable member thereof.
“It is in this context that one should look at the disqualification under Article 63(1)(h) of the Constitution for a limited period of five years imposed upon a convict after his release from jail.
“Even so, with the limited period of his disqualification as an ex-convict for offences involving moral turpitude, he still carries the odium of his past conviction before the voters in his constituency, whose hearts and minds he has yet to win.
“An ex-convict suffers huge handicaps to find dignity and acceptance for himself in society. The notable effort by the Constitution to allow him an opportunity to reform himself and to strive for such a position in society cannot be deprecated for providing him relief rather than longer disenfranchisement,” it said.
Justifying lifetime disqualification, Justice Bandial said a candidate for election who has committed misconduct falling within the terms of Article 62(1)(f) of the Constitution, has on the Islamic and also universal criteria of honesty, integrity and probity, rendered himself unfit to hold public office.
Such person cannot be compared to the case of an ex-convict under Article 63(1)(h) of the Constitution because he has not paid a personal price for his delinquent act which includes misrepresentation, dishonesty, breach of trust, fraud, cheating, lack of fiduciary duty, conflict of interest, deception, dishonest misappropriation, etc, as declared by a court of civil jurisdiction
“It is in such circumstances that a person declared to be dishonest or in breach of his trust or fiduciary duty or being non-righteous or profligate must suffer the burden of that finding of incapacity for as long as the court decree remains in force.

The legal minds are criticising the verdict due to different reasons. Firstly, they are objecting to the constitution of the bench to hear such an important issue. Out of the five, four judges are from the province of Punjab.
Interestingly, most of these judges were also part of the benches which issued rulings in high profile cases relating to the Panama Papers, The Elections Act 2017, and the Hanif Abbasi case.
The legal experts believe that such matters should either be fixed before a full court, or if the CJP constitutes larger benches, proper representation of each province should be ensured to remove any negative perception.
One section of lawyers believe the ruling has further tightened the eligibility criteria for lawmakers, adding that the verdict mainly relayed judgments delivered by former CJP Iftikhar Chaudhry.
They are wondering if a fair opportunity and adequate remedy under relief is available to candidates. There is no chance of appeal in such matters and the review has a very limited scope.
Likewise, the ruling Pakistan Muslim League-Nawaz (PML-N) lawyers are showing concern that the verdict did not remove ambiguities in conflicting verdicts.
A senior PML-N leader said the CJP himself allowed former MPA Haji Nasir – who was disqualified under Article 62 (1) (f) of the Constitution – to contest local bodies election.
He also referred to the Ajmal Asif and Zafarullah Dandla cases, in which the SC allowed them to contest the election despite their being disqualified under Article 62 (1) (f) of the Constitution. Another Sharif family member termed the verdict as ‘religious sermon’.
Pakistan Bar Council (PBA) member Raheel Kamran Sheikh said the judgment reinforces the fact that Pakistan is a theocratic state. He said the interpretation by the SC, though legally sound, is unusually harsh and penal.
“If parliamentarians do not wake up even now to the potential dangers of the power embodied in Article 62 and fail to suitably amend the same, courts will continue to enforce their subjective standards of morality and ban them for life one after another even if their alleged mischief is not culpable enough to be labelled as a crime,” he said.
This is the second consecutive verdict wherein judges have relied on Islamic provisions and the preamble of the Constitution. Earlier, the same judges also expressed similar views in their verdict in The Elections Act 2017 case, which resulted in the disqualification of Nawaz Sharif as PML-N head.