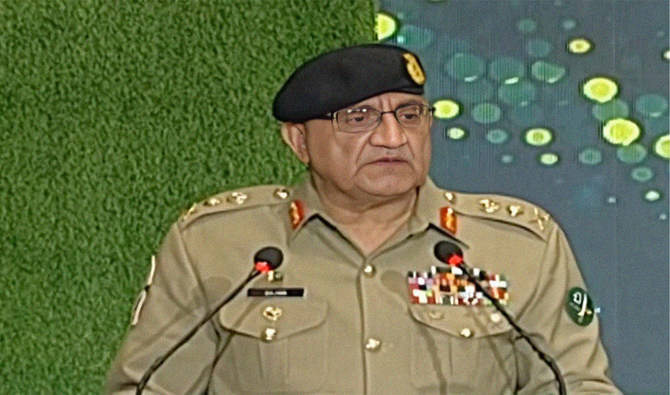 -Addressing Defence and Martyrs’ Day ceremony, Gen. Bajwa says Army initiated process of catharsis
-Advises political parties to accept election results so elected govt can take charge rather than ‘selected or imported’
-Stresses true democratic culture by eradicating climate of intolerance
-Regrets Army’s interference in politics for decades made it target of criticism
-Adds East Pakistan was a political failure, not Military one

RAWALPINDI: Chief of Army Staff General Qamar Javed Bajwa Wednesday said that the Army had initiated its process of “catharsis” and expected that political parties would follow suit as well and reflect on their behaviour.
“This is the reality that there have been mistakes from every institution, including political parties and civil society,” he said during his last address as the Army Chief during the Defence and Martyrs’ Day ceremony at the General Headquarters in Rawalpindi
“No single party can take Pakistan out of the current economic crisis,” he said, adding that lessons should be learned from such mistakes so the nation could move forward. The COAS went on to say that a true democratic culture has to be adopted in Pakistan by eradicating the climate of intolerance.
“In 2018, using RTS as an excuse the winning party was called selected,” he recalled, adding that after being ousted via a no-confidence motion one party named the other as “imported.”
“We need to reject this attitude, winning and losing is a part of politics and all parties should have courage to accept their defeat or victory so that in next election instead of an imported or selected government an elected government is formed,” he maintained.
The COAS said that armies around the world are seldom criticised, however, Pakistan Army is often subjected to criticism. “I think reason for that is the army’s involvement in politics. That is why in February, the army decided to not interfere in politics. I assure that we [the military] are strictly committed to this and will continue to be.”
He added that instead of welcoming this constitutional process, some factions criticised the military using “inappropriate and impolite language”. The COAS said that criticising the army is the public’s and political parties’ right, but one should be careful with their choice of words. General Bajwa said that a “fake and false narrative was concocted to instil a state of chaos in the country” and reiterated that the military leadership can do anything but go against the county
“Now an escape route is being taken from this false narrative. The senior military leadership is being addressed with inappropriate titles,” he added.
Berating the PTI’s “foreign conspiracy” narrative, Gen Bajwa said that it is impossible “or more appropriately this would be a sin” if the army would be sitting idly amid a foreign conspiracy being hatched in the country.
“The Pakistan Army had enough opportunities and resources to respond to this inappropriate invasion; however, the military leadership showed courage in the larger interest of the country while refraining from making negative statements,” he said.
However, Gen Bajwa warned that everyone should keep in mind that there is a limit to this patience, “I wish to move forward by keeping aside this inappropriate and offensive behavior against me and the army.” Touching upon history during his address, the outgoing army chief said that he wanted to “correct” some facts regarding the events of 1971.
“1971 was not a military, but a political failure. Our army fought courageously in East Pakistan and made unprecedented sacrifices. The number of soldiers fighting was not 92,000 but only 34,000,” the COAS said highlighting the number were against 250,000 Indian and 200,000 Mukti Bahini soldiers. He added that the sacrifices of Pakistan Army were also acknowledged by the Indian army chief.
“The nation has not acknowledged the sacrifices of these soldiers till date, which is a great injustice,” the outgoing army chief said while emphasising the military’s round-the-clock service despite criticism. He added that the army has always served the country and the nation beyond its mandate and will continue to do so.
“Nations that forget their martyrs fade away. During times of war and peace, Pakistan Army is always engaged in defending its motherland with their lives on the edge,” he said adding that sacrifices of martyrs are behind peace in the country.
General Bajwa, during his address, said that the basic job of the armed forces is to protect the geographical boundaries. At the onset of the ceremony, the COAS paid tribute to the martyrs of the armed forces and assured their families that the Pakistan Army will never leave the bereaved alone. He also apologised for the delay in the Defence and Martyrs’ day ceremony due to the floods.
“Firstly, I would like to pay tribute to the martyrs who are the pride of Pakistan while acknowledging the patience of their bereaved families,” he said, reassuring that the army will continue to fulfill their financial needs.
“I’m giving my last address as the army chief today I feel proud to have served as the commander of this great army for six years,” General Bajwa said adding that the peace in cities and villages is accredited to the sacrifices of its martyrs.
The ceremony was postponed in September due to the catastrophic floods across Pakistan following heavy monsoon rains. At the outset of the ceremony, a video highlighting the devastations caused by floods in Pakistan was played. The military soldiers, who contributed toward relief, rescue and rehabilitation efforts during the flooding, were paid tribute through the video.
A documentary titled Falah-o-Behbood was also played during the ceremony which was attended by serving and retired military officials at the GHQ. The documentary shed light on the military’s efforts for the welfare of its soldiers and their families.
This was General Bajwa’s last Defence and Martyrs’ day ceremony as Pakistan’s army chief and comes just six days before he is set to retire from the post on November 29. He was appointed army chief in 2016 for a three-year tenure, which was extended by three years in after parliament legislated on the tenures of services chiefs on the orders of the Supreme Court. –Agencies