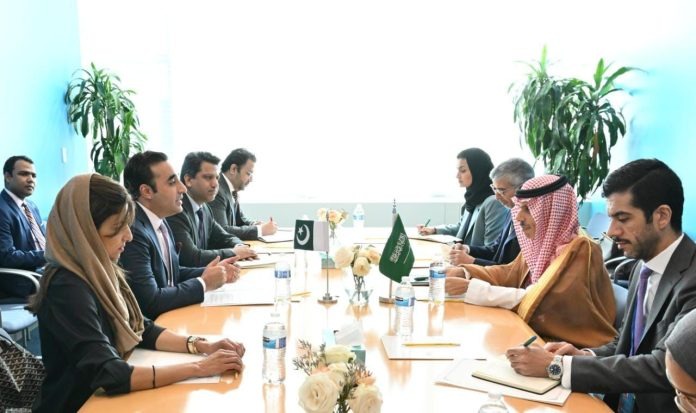 ISLAMABAD: Foreign Minister Bilawal Bhutto Zardari met with Foreign Minister of Saudi Arabia Prince Faisal bin Farhan Al Saud and exchanged views on various aspects of bilateral relations as well as the regional situation and global issues.
The meeting was held on the sidelines of the 77th session of the United Nations General Assembly in New York.
The Foreign Minister conveyed greetings and best wishes for the Custodian of the Two Holy Mosques His Majesty King Salman bin Abdulaziz and His Royal Highness Crown Prince Mohammad bin Salman. He also appreciated the vision and efforts of the Saudi leadership for progress and development of the Kingdom and regional peace.
The Foreign Minister also briefed His Highness about the ongoing flood situation and the challenges faced by Pakistan in relief, rehabilitation and reconstruction. He thanked the leadership and people of the Kingdom for their generous support for Pakistan in the wake of the recent floods.
Both Foreign Ministers emphasized the vital importance of Pakistan – Saudi Arabia relations and agreed further to deepen mutual cooperation in all fields including economy, trade, energy and investment.
The Saudi Foreign Minister offered condolences over the loss of precious lives. He also expressed concern over the damage to infrastructure. He assured the Foreign Minister of Pakistan of the Kingdom’s full support in regard to relief, rehabilitation and reconstruction efforts.
Meanwhile, Foreign Minister Bilawal Bhutto Zardari held a bilateral meeting with Foreign Minister of Egypt Sameh Hassan Shoukry and reviewed the entire spectrum of bilateral relations and agreed to enhance the frequency of bilateral political exchanges.
According to Foreign Office, they met in New York on the sidelines of the 77th United Nations General Assembly session.
They underlined the need to increase cooperation related to trade, defence, counter-terrorism, education, culture and tourism.
The two leaders also exchanged views on important developments in Afghanistan and the region as well as the rise in global tensions. They emphasized the importance of finding peaceful solutions to conflicts and disputes through diplomatic means.
The Foreign Minister also assured of Pakistan’s full support to Egypt as the Chair of CoP-27 Climate Change Conference. He added that
Pakistan would contribute to the success of the conference by participating at the highest level, and projecting the views of developing countries in its capacity as the current Chair of Group of 77 and China.
Pakistan and Egypt enjoy excellent fraternal relations underpinned by a shared heritage and commonality of views. The two countries closely collaborate bilaterally, as well as on regional and global issues of mutual interest.