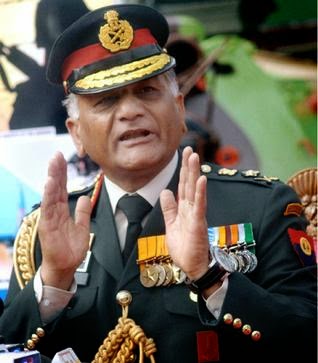 Former Army Chief of India, General VK Singh, who had earlier admitted that he, under his command formed a special military outfit, described as Technical Support Division (TSD) and this TSD had not only been tapping the communications and private life activities of certain Indian politicians, bureaucrats and army officers but also carried out a number of unauthorized secret missions inside Pakistan, on Saturday, joined India’s top anti-Pakistan and religious extremisms oriented political party the BJP along with a number of other senior ex-army officers, exposing the deep-rooted links between Indian army and fanatic Hindu militants.
Gen Singh, who joined the BJP along with a number of other ex-servicemen in presence of party president Rajnath Singh, said the troops should support it so that a “stable, strong and nationalist” government is formed. “I saw only BJP as nationalist party,” he said while explaining the reason for joining the party. “We, who have served on borders, should work with nationalist forces. So, we have decided to move with BJP to bring a government which is stable, strong and takes decisions in national interest”, said the 63-year-old who retired in May 2012. He expressed confidence that the enthusiasm of the servicemen will make BJP stronger. Welcoming him into BJP, Rajnath Singh said if BJP comes to power, it would take good care of the armed forces. He used the occasion to attack the UPA government, saying it has not looked after the armed forces well. In this context, he cited the recent mishaps involving the Navy.
The Daily Mail’s investigations indicate that the move, made by General VK Singh, in which he has not only himself joined a top most terror tainted political outfit but has also urged upon the Indian troops to supper this party that is known for comprising top Hindu militant groups, engaged in a number of terror activities against monitories across India, has categorically confirmed that the investigations, carried out by Mumbai’s Anti Terrorism Squad (ATS) under the command of its slain Chief c Hemant Karkary, exposing Indian Army’s nexus of evils were just spectacularly accurate and true.
Hemant Karkare was killed under the garb of Mumbai attacks, just a couple of days after he expressed threats to his life by BJP and Indian army’s intelligence win with Congress General Secretary Dig Vijay Singh, for exposing undoubted connivance of Hindu extremist groups and Indian army commanders in a number of terror attacks against minorities in India, specially the Muslims. Karkare’s antiterrorism investigations into infamous Samjhauta Express terror attack and Malegaon bomb blasts had exposed beyond any doubts, the involvement of top serving officers of Indian army in these extremely high profile terror acts, with close association of extremist Hindu groups. Karkare’s investigations had exposed at least 8 top senior army officers who were part of this nexus of evil including the officers with the ranks of Generals and Brigadiers while he booked a senior serving officer of the military Intelligence, Colonel Srikant Purohit and presented an immensely foolproof charge sheet against him in the Indian court.
The Daily Mail’s investigations indicate that Karkare investigations crystal clearly exposed that an extremism based Hindu outfit Abhinav Bharat was being run by both the serving and retired Indian army officers and this outfit was working on the agenda of creating a greater India in the region by including Pakistan and other regional territories under Indian control while the other part of agenda also indicate plans of taking over of India by Indian army while politicize the military and militarize the country was found to be the top slogan. International Media reports and the investigations of The Daily Mail have constantly been indicating that there was a great understanding between Indian army and the extremist political party the BJP and both have been supporting each other against Pakistan. The joining of BJP by former Indian Army Chief, clearly proves that not only the Karkare investigations were completely correct but the fears raised by the international media and the Investigations of The Daily Mail in this direction were also completely undeniable.

Bureau Report Lahore: Pakistan cricket team players will reportedly not be allowed to take their families with them on the upcoming tours to England and...
Read more

Sports Desk Colorado: Sports fans still fail to recognize the huge effort and dedication it takes to get on to a Paralympic team, American triathlete...
Read more

ABOUT US
Pakistan's Leading English Newspaper
FOLLOW US
© Developed By iTechEra